Dominique Pamplemousse is first not-currently-existing video game I'm doing a plug for, and that's because it's the first one that seems both like it needs us and we (you, I, others) need it. If you haven't seen it, it's a stop-motion musical adventure game with a single indie developer, and those are possibly not even the most interesting things about it. It's been featured on Twitter and on the front page of IndieGoGo. You can play the early demo of the game here to get a sense of it. It's strange, it's fun, and it seems potentially quite significant. Deirdra has posted a list of reasons why you should support it, and I want to pull just a few of those out. 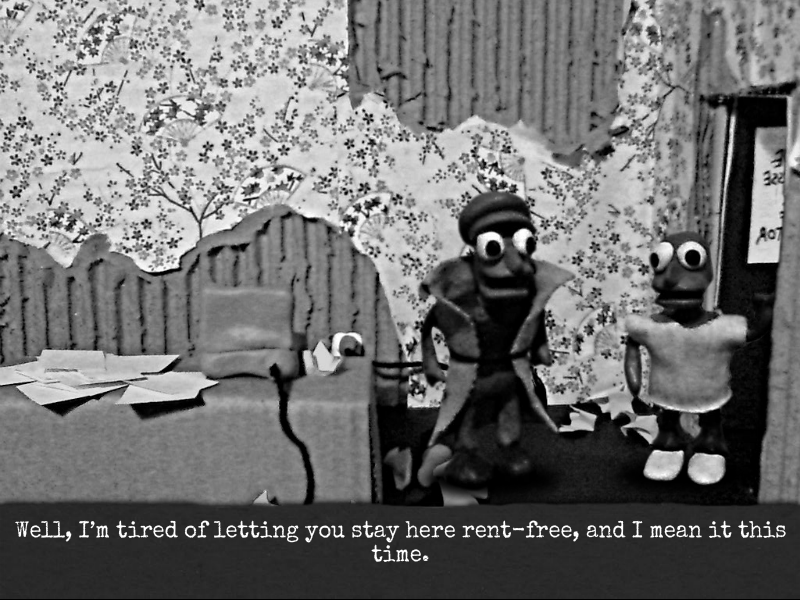 Let's start with these:

The first two should convince you of the third. As a video game - as an aggregate of story, mechanics, art, and technology - this is already doing things we don't see in the industry. We've come a long way in video game artistry, going more towards realism with voice acting and sharp graphics, but I sometimes think that the pace of the technology causes us to skip over some meaningful digressions along the way. The stop-motion art Deirdra's going for has the kind of stylization that the English Major part of me wants to expound on for pages, but for now, just consider whether you've seen anything that, visually, looks anything at all like this in video games. You haven't? Then don't you want to see where she can go with it, and where people after her go with it? New ground doesn't get broken on this front every day. You can help her make it so. The same goes for the musical element. It's a really different, more poetic, way of telling a story. I'm not sure there's been a game yet that has a significant lyrical element as a driving force throughout. Some games have made music a key feature, but it's never felt like a critical mechanic or means of communicating the story. There's space to explore here, and Pamplemousse seems well-qualified to lead the initial expedition.

For me, though, the more significant reasons to support it are the following, again from Deirdra's list:

I haven't done a post about gender and video games, mostly because I'm not sure a graduate dissertation would have the breadth and depth to properly address it. Start here, though: Aren't you, as a gamer, a little embarrassed that so few games do ANY of the above in a meaningful way? (Ms. Pac-Man doesn't count.) The problem is that, really, games like this aren't being made. And there are reasons for that - mostly bad ones, but they exist. It's hard in a medium associated with frivolity to really get at some of the issues underlying race and gender so that we can deliver them in a way that feels authentic. I don't really know how Pamplemousse plans to address this, but so far our protagonist is of ambiguous race and gender, and it doesn't seem like we're expected to presume him/her to be a white male. That, by itself, is pretty new. Not by any means completely new, but there's a wealth of cool storytelling to be had in these areas, and again, Pamplemousse looks like a strong place to start.The game still hasn't hit its funding on IndieGoGo. I for one would like to see it do that, but it's running short on time. If you can give $5, you'll net yourself a preorder of the game, and $10 gets you the soundtrack. If you can't give, post about it on Facebook. There's a lot of cookie-cutter crap out there that's too much like what came before it to make meaningful changes to the medium. Don't pass up an opportunity for something novel.
Posted by Solomon at 9:45 AM