"That Asshole!" you've been thinking to yourself. "He said he would talk about video games and then he just took like more than a week off! What kind of stunt is he trying to pull?!" The answer, gentle strawman reader, is that I have been trying to pull the stunt of meeting a deadline. Which takes a lot of time! But! We have done it (or near enough as makes no difference). We have something to submit to BostonFIG, which is of course the deadline we were rushing at, AND they've done us the fine courtesy of extending that deadline.  So we have some touching up to do but none of the blind panic.

"OK, Asshole," you say, less confused but still angry, "then if the deadline got changed, why haven't you been posting??"

Well, actually, I'm going to be! New post Tuesday, wherein I will try to describe what I can about the game we have been creating. It's kind of going to be a lot of fun! Here. I will give you a teasing picture. 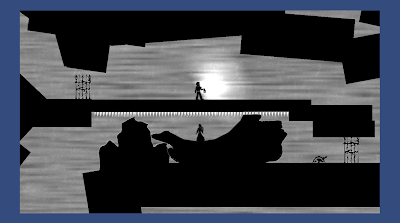 Hey! Woah! What's going on there? Looks like a guy and a girl, and maybe some other stuff? Awfully monochrome - is that on purpose? I wonder how you move them, and how that girl is going to get out of there. Man! So mysterious! I guess I'll give some more details soon, maybe? Development right now is still in the "put something together and see where that goes" phase, and our next phase will probably "prototype the hell out of a million different ideas and find the fun." I hope you'll help us find the fun.

Also - you know I review indie games, right? And that most of the games I've reviewed so far have been more popular indie games because I know and love them but that doesn't mean they're the only games I want to know and love, right? So, what I'm saying is, if you want me to review your game (people coming here from Twitter, you especially!) drop me a line or leave a comment and I'll get right on that. I have a lot of games to play right now! But I'd love to give attention to someone who needs/wants/deserves it. So let me know.