So! I'm going to talk about that thing I haven't really talked about yet.

Candlelight is a 2d puzzle-platformer that looks like this:

That's so pretty, isn't it? It's still in pre-proto-alpha. Here is what one character looks like right now:

And here is what the other looks like right now:
Two characters might make you think "multiplayer," and when we've had two people sit down to it, that's often how they approach it. But! The game is intended to be single-player. That might make you think that you control one at a time and switch off, or that one is an AI, or that you pick one to play as. But! Those are untrue. You control both at once. This might sound a little complicated, but remember we said "puzzle platformer." Don't picture trying to jump both Mario and Luigi through Bowser's castle, picture trying to position a second character in Braid, or in Limbo (maybe on some of the earlier puzzles). The ability to move both at once, so far, hasn't translated into a need, though most players haven't so far had trouble with that. The controls are relatively simple; the characters can move, jump, and pull levers, and that's about it at this stage.

OK, so you're controlling two characters. At the outset, there's not a lot of explanation of what the characters are doing; they are exploring, helping one another along. When one gets stuck, the other usually has to find a way to help him/her proceed.

ANYWAY. "But Sol," strawperson reader says ("strawman" makes assumptions about my readership that I don't like) "what if I walk the characters away from each other? WOULDN'T THAT SUCK."

Turns out, not really! Check out that picture up above, where there are two small rectangular screens. That's what happens when you separate them! Dynamic split-screen. Your characters get separate screens that separate and rejoin as they go away from each other. Better still: The screens move in relation to one another to give you a sense of where the characters are in relation to each other! So, in that picture up there, the boy is to the upper-left of the girl. In the picture below, they're directly above and below each other:

The characters may have abilities in common, but they aren't interchangeable. Each, in fact, has a special ability. The boy's ability is the one demonstrated in the screenshot above, and the one that I showed you earlier: 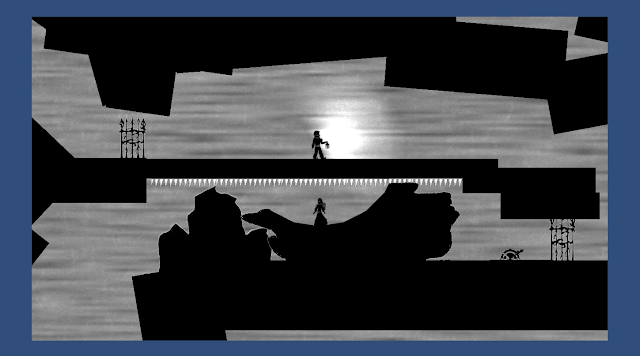 That lantern isn't just for show; it causes some objects to appear, and others to disappear - either of which can be good or bad. In situations like this, it lets him see new paths and assist his friend (what IS their relationship, anyway?) along through places she wouldn't be able to get to otherwise. It has its downsides, though - spike pits only he can see, gates that only appear when he's close to him, and so on. It is an ability, but it's also a limitation; it's a fact that sometimes assists and other times must be contended with, and since it can't be disabled, it's something the boy just has to deal with. What's this all about? Seeing. The lantern is the boy's way of seeing the world, and that is both empowering and limiting. The world might conform to the way he imagines it, but maybe that isn't always in his best interest?

What's the girl's power? It's a secret. Unfortunately, her ability is a little more complicated, so we aren't doing it in time for our submission to BostonFIG, and I don't intend to reveal much more about it until we can show it off a little, because it's going to be really neat. I will give you a hint, though: take a look at that mask. Why the mask? If the mask is the counterpart to the lantern, what does that mean? Maybe I'll tell you soon.

So, what else do I have to tell you about it? At this point, not too much - we really want to get more feedback before we tell you more, and we'd certainly like to prototype more. But I'll tell you a little about our influences.

-Super Metroid is a huge influence; the feeling of exploring that cool, creepy underground rule is something I still haven't seen perfectly replicated anywhere else.
-Shadow of the Colossus has a lot of the emotional weight we want our game to have, and it tells us that less is more; I think that game could have had zero dialogue and gotten away with it a-ok.
-Braid has lovely puzzles that break my brain. Are we doing the same puzzles? No. Will our puzzles be that lovely to solve? I hope so. Braid also did a magnificent job of getting emotion across, and that's always something to aspire towards.
-Limbo is dark and dreary and dreamy, and maybe at this stage our game looks a little more like Limbo than we'd thought it would. Is that what we're going for? Not strictly; when we find our style, it will be much different from Limbo. But would I love to have the organic puzzles and creepy, lethargic atmosphere that Limbo does such a good job at.

Questions? Thoughts? Concerns?  Post 'em. I'd love to know what's going on in your minds.

EDIT: Want to see our website? Find it here! http://idleaction.herokuapp.com/
Posted by Solomon at 1:32 PM